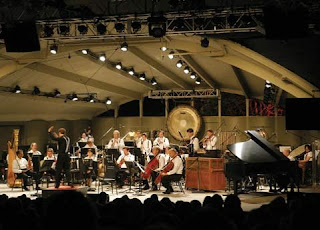 The Ojai Music Festival has had some exemplary music direction in the recent years, the bizarrely funky Libbey Bowl stage being graced with the likes of eighth blackbird, Robert Spano, Pierre Boulez, and Pierre-Laurent Aimard. Then this year, apparently addressing fears that the festival might become too relevant, we got George Benjamin, who almost succeeded in programming an entire festival without the corrupting influence of a triad (and he would of gotten away with it too, were it not for those meddling kids! Meaning, Frank Zappa).

I was prepared for this, so I trouped off to the final concert of (brace yourself) Ligeti, Messiaen, Knussen, and of course George Benjamin (with a smattering of Boulez thrown in for good measure) armed with a steely Sancerre to complement the icy coldness of European modernism.

Now I always thought the whole point of the Ojai Music festival was to picnic on wine and cheese while listening to modernist excess under the stars, but apparently the city of Ojai has different ideas, as ushers actually confiscated my friend's (who is a professor a very prestigious school of music, mind you) unfinished Malbec. This is still hard for me to wrap my mind around, as I've yet to hear a concert that isn't substantially improved by fine wine, but luckily for me and the middle-aged new music aficionados secretly sipping wine from styrofoam coffee cups around me (frat boy style), we avoided arrest.

What I was wondering about while I was listening to the birds and Ligeti's Chamber Concerto was wafting oh-so-softly in the background (while I love the piece, and the Ensemble Modern played brilliantly, its triple pianissimo dynamics just doesn't seem like the best outdoors programming decision somehow): who are these people sitting around me that would come out to this thing. I mean, I knew the 30 members of the LA new music community in attendance- who were the other 700 people? Did they know what they were getting into? I asked the woman sitting next to me this very question. She won her tickets on the radio. But she was none-the-less weirdly enthusiastic.

I think I was more interested in my wine and cheese (Ossau-Iraty). George Benjamin seemed to meet all the stereotypes and expectations of European new music. Thank God for Messiaen, but if this is what passes for cutting edge in "Old Europe," bring on Dawn Upshaw and the Australian Chamber Orchestra, 2011.
Posted by Ben Phelps at 3:24 PM