Stuff I'm thinking about going to

It's fall preview time, and so I wanted to post several upcoming concerts and events worth posting and then make snarky comments about them. Sorry if this post is a little LA-centric. Actually, I'm not sorry (see how this is going to go?).

The LA Chamber Orchestra kicks off their season this weekend with Leila Josefowicz performing Prokofiev's basically perfect First Violin Concerto. As LACO does, there will be a concert Saturday in Glendale and Sunday at Royce Hall. I can't tell you what an amazing composition the concerto is, if you aren't already aware. Because I can't tell you, that is the end of the sentence. And because it's LACO, there is also Haydn's 88th symphony and a piece by Pierre Jalbert- because they love him.

For more underground fair, you can check out the Annie Gosfield Project, because even somewhat obscure New York-based sound artist / electronic musicians get projects named after them these days. But I still have to respect the daring programming of the two joint-producing new music groups- In Frequency, and People Inside Electronics. Though it's a little hard to figure out, there is an additional free concert on the USC campus September 30th. While I'm on the subject, Annie Gosfield wrote a interesting article for the New York Times about being a composer in 2009. It gives you an idea of the aesthetic we're talking about here, and contains good advice for young composers, which in following has led me to write music completely, diametrically opposed to hers.

Did I mention that the LAPhil is playing Turangalila Symphonie in October? And it's about time! I have no idea if The Dude knows how to conduct Messiaen, but I'm freakishly excited.

I don't need to mention that "art-rockers" The Dirty Projectors are going to be at the Wiltern September 24th. But that's sold out of course, so I won't be going. Speaking of sold out rock shows, people are also really excited about the XX (at the Palladium on September 22nd). Though they were already overnight indie-sensations, they are totally blowing up right now, so bring blast guards. Really bored-sounding cross-gender unison singing is so hot right now!

Well, now I've pissed off many of the hipsters reading the blog, so I've got to redeem myself. 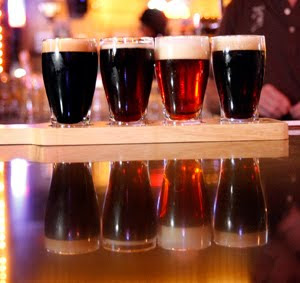 Besides music, one of my few other passions (along with urban planning issues, evolutionary psychology, porcupines, etc.) is fine food and beverage. (I also love super-ultimate-beer-pong-shot videos). So imagine my schoolgirl-like glee at the forthcoming LA Craft Beer Crawl, in downtown LA, September 24th. And when I say schoolgirl-like glee, what I mean is manly, beer-loving glee. Get your tickets now! And if that's not enough, there is still the Tour de Fat October 23rd, combining bicycles and New Belgium brewing at the LA state historic park.

I'm also pretty passionate about Australia. I mean, what's the deal with it?
Posted by Ben Phelps at 1:20 AM No comments:

I've long been somewhat of a genius denier. This is not to say that there aren't really really talented people out there. The problem is where we like to think they come from.

Case in point: musical prodigies. I've known quite a few. And while we might like to trot them out on stage and be amazed at their freakish abilities, I've yet to know one that didn't practice like a million hours a day more than their jealous competitors.

Anyway, please check out this amazing podcast. It's a RadioLab episode featuring Malcolm Gladwell, who will eloquently argue my point. Gladwell, for those who may not know, is the New Yorker correspondent turned best-selling author beloved by everyone except those who are jealous that he got a million dollar advance on his first book deal. These are the same people who don't like Jonathan Franzen. Radio Lab, for those who may not know, is by far the most amazing post-modern science / human-interest program on radio today bar none.

The one thing I wish Malcolm had added when Robert the host says "what about this guy that works a thousand hours in his garage writing songs, who loves music, but writes bad music, and the guy who loooooves music and spends thousands of hours writing songs and is named Richard Rogers" is: show me that guy. Show me the musician that is passionate about music, has practiced their instrument or their craft tens of thousands of hours, and sucks.

The other reason I am drawn to this story is because I'm the guy that has always been really skeptical of the genius worship of the likes of Bach, Mozart, and Beethoven. Yes, they were amazing composers. But they had their bad days (check out The Battle Symphony). But when a teacher tells me "you must play Bach this way because it's Bach, and he's a genius," I just feel that the logic is backwards, and I am inclined to disregard the advice, and thus lose competitions. This might say more about my own personality flaws then Bach, but the point is this: the music isn't good because Bach is a genius. Bach is a genius because the music is good.

Let's get over it a little.
Posted by Ben Phelps at 4:06 PM No comments: