What the heck is the deal with every indie band having Glockenspiel now? And I use the term loosely- "indie band" not "Glockenspiel"- to include everything from Maps and Atlases to Andrew Bird to Vampire Weekend. I feel like I haven't been to a show in the past year that didn't involve somebody breaking out the Glockenspiel at some point. 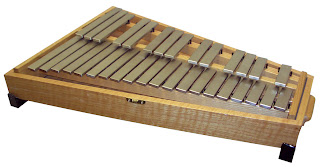 Now, I can understand the musical need for the Glockenspiel. Sometimes the sublime natural beauty of the instrument is called for, in order to heighten the power of the musical moment. Though I frown on on indie-artists using the instrument as a cheap emotional gimmick- I worry that producers, fearful that their album has failed to pull the correct emotional strings, often fallback on the Glockenspiel to try and save a sinking ship. No amount of Glockenspiel- no matter how beautiful and alluring it can be- can save mediocre music. However, used right, I think these artists have discovered the instrument's awesome and versatile emotional power. In skilled hands, it's like some greater musical soul rises out of the high-octane instrument's shrill, metallic piercings, elevating the listener to a greater level of musical experience.

It's the only explanation I can come up with. However, despite the Glockenspiel's ubiquity, for some reason your average Glockenspielist still gets little respect on the streets. Well, in order to highlight the much deserved sex appeal of the instrument, I've began compiling a compendium of Glockenspiel uses in modern pop and indie-rock.

By the way, you should watch the whole thing to see what Bird can do with a Glockenspiel and loop pedal.