If you're anything like me, first of all, good. But secondly, you've been waiting patiently for a chance to hear Osvaldo Golijov's cello concerto Azul again, ever since you first heard it at the Aspen Music Festival a couple years ago.

Why would you want to hear this piece? Well, first of all, at Aspen the general consensus among the other composers was of vague disgust. One of your composer colleagues called it a "travesty"- and that's a quote. You never got a clear explanation of why exactly. You should just understand. Yet one of your percussionist colleagues called it "the greatest modern piece I've ever heard." 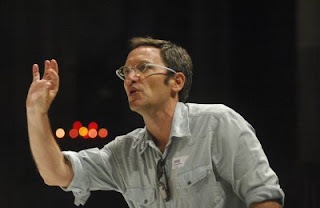 Any composer that can cause other composers such queezy, stomach-churning disgust must be doing something worth blogging about. So imagine my surprise when everyday I wake up to discover that there is still no commercial recording of the work available. EVERY. DAY. We're talking about a popular new work by one of the country's biggest living composers. Written for Yo-yo Ma, for God sakes. I mean, is there anything that guy doesn't record? Yes. Golijov's Azul. It's enough to make you wonder if the recording industry is in some kind of sea-change or something. Mostly though, I just wanted to hear it again to see if I could work out what all the fuss was about.

Well I'm reporting, for those who may care, because you should, that you CAN hear it for yourself, right now, on something called the "internet." No, not thanks to some kind of cutting-edge indie-classical underground release, but instead from the good folks at American Public Media and SymphonyCast. Thanks Brian Newhouse! And thanks to me for doing the research. You're great, me. In fact, I'm providing the link right here. The Golijov begins at 10:45.

Anyway, I don't have any great answers to how this music is downfall of serious artistic accomplishment in Western music, but I suspect one of the problems the haters have is that they are just not very comfortable with the idea of blissing out to serious music. To them, seriousness is to be taken in its purest form, as a sort of cold gritty porridge, which is to be contemplated, studied, and slowly digested through a well adapted series of four bovine stomachs. Seriousness precludes bliss, by definition. Well, not to get bogged down in these archaic aesthetic debates, but many rigorously acceptable composers from the pantheon have had their share of blissed-out extravagances- Debussy, Mahler, Messiaen, Beethoven, and I'm pretty sure Wagner based his whole career on the concept. Haters gonna hate, I guess. But if you're like me, your new main concern is that this recording kind of sounds like it was compressed through a toilet-paper roll for radio broadcast, and you would like a serious recording to play through your prized Hifi stereo system.

So write to the music industry and demand a formal release. Tell them I sent you. And while you're at it, maybe you should suggest they reexamine their business model or something, I'm worried about them.
Posted by Ben Phelps at 11:23 PM