Amoeba Music and Land Use Politics

There's been a weird confluence of intellectual passions of mine- between the economics of records and digital music and that of land use planning. A strange tale, it involves the iconic Amoeba Music in Hollywood (last record store standing! Almost, anyway).

So here's the deal: insane megalomaniac anti-development advocate Michael Weinstein, who also happens to run the huge Aids Healthcare Foundation out of Hollywood, is very angry that the city of Los Angeles has approved a 26-story complex on the iconic site of Amoeba Music. The project certainly has its flaws (way too much parking) but we're in the middle of a historic housing shortage here in Los Angeles, we need everything we can get. 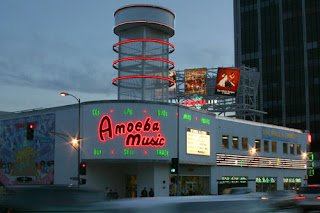 Michael Weinstein really hates building things. Especially things close to his Hollywood office that might block his views. He has a laughably terrible success rate, but he's sued to try and stop this development, and this one because they demolished another iconic building- an Old Spaghetti Factory (Los Angeles has really turned its back on the proud history of its old blue-collar spaghetti workers). Then, he offered to buy the building from the owners he was suing at like 20% of its market value to make the lawsuit go away in a total mafia move. That hasn't worked. Oh, he also was the financial force behind the failed Measure S campaign (which lost oh-so badly) and countless other failed ballot propositions (one I even voted for). Learning much from Hollywood (the figurative one, not the literal location) he is not one to be deterred by repeated failures. After all: why do we fall?


Oh one other thing about the Aids Healthcare Foundation and Michael Weinstein: it's basically an insanely profitable pharmaceutical company taking advantage of blatant federal drug loopholes hiding behind nonprofit status. Only around 5.8% of its income is from contributions and almost all of that is from donations to its Out of the Closet thrift store chain. According to its federal tax returns its net fundraising for 2016 was negative $410,729 (I hope to beat that number with my own fundraising efforts this year!) It did have net sales (mostly pharmaceutical) of $279 million though, and paid its executives $4.7 million. (More on the some-would-say fraudulent tax abuses of the AHF here, and here and here).

So anyway, Michael Weinstein, who hates all new buildings, decides to jump in to save Amoeba Music- or at least the iconic historic building (year of construction: 2001). He's suing for historic protection, notably because Paul McCartney played there once, iconically.

Now the Los Angeles Times reports that Amoeba music is asking him to, well, please stay out of it. Herein lies the confluence with the music industry: it turns out that Amoeba music sold the building to the developers themselves to the tune of $34 million. In fact, it's this $34 million windfall from the land sale that is basically the only thing keeping the iconic record store in business. They are privately held so don't release their books (no ProPublica page for me to link to) but I strongly suspect Amoeba to be a money losing business right now, except for that land sale. They want to use the money to be able to move to a smaller iconic site and stay in business.

As I have discussed at length- and more to come- records are a terrible business. Yet we all still do it for some reason. I remember I had a professor in college that had owned a recording studio in Hollywood- and this was like 20-30 years ago- say that the only way you will make any money with a recording studio is when you sell the building. If anything, this is even more so today. On steroids. If you are lucky enough to own a building, that is!

Michael Weinstein doesn't care though, his main mission is to prevent building anything, anywhere, ever, and he has no problem using Medicare and Medicaid dollars to fund his political efforts to do so. From the Times article: “'We are fighting for the integrity of our community and to preserve what makes it interesting, whereas it seems many others are just trying to cash out and milk it for everything it is worth,' Weinstein said after noting that Amoeba had sold its building for $34 million."

Thanks Michael!
Posted by Ben Phelps at 9:40 AM