In Frequency in LA 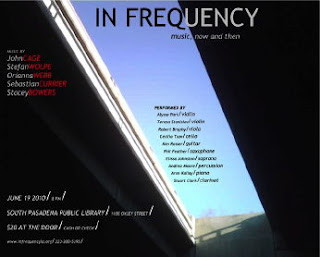 I'll start with my friend Andrea Moore's new group, In Frequency. The concert is - tonight! Oh crap! Well, if you're going to miss that, I will point out she also has a blog, where I think she makes some interesting and valid- if high-falutin'- and generally much more insightful points than me about the state of classical new music. Where they need my help is in integrating the blog into the rest of the web site. But, contrary to all appearances, I'm trying to be a musician here, not a web designer.

The concert will include Stefan Wolpe's String Quartet, written in 1969 while he was suffering from Parkinson's disease. A delightfully radical, rarely played composer who came of age in Weimar Germany, his music from the twenties is some of the most seriously out stuff of the period. Unfortunately, this piece is from 1960s New York- but I'm still very curious.

So I know my first few posts are about pretty (novelty size irony-quotes) "complicated" music, or as most people refer to it, "music that sounds bad." I don't want to give the impression that this is my only interest. There are many great opportunities for hilarious blog posts just around the corner...
Posted by Ben Phelps at 2:35 AM