So Percussion and Matmos at the Rec Center Studio

To be a hip classical act these days, you have to collaborate with or somehow involve cutting-edge indie-rock or electronica in your music. It's the zeitgeist. It's in the air. The reasons are economic- arts institutions desperately want to tap into the well-heeled 20-something "hipster" demographic, who often go to a lot of concerts but rarely step foot in concert halls; or they are natural- many young composers simply are part of the demographic themselves. This fad is pervasive: (Le) Poisson Rouge in New York is the venue, New Amsterdam Records the record label (or trying to be, anyway). New music group Alarm Will Sound tours with the Dirty Projectors, and the hottest young composers today have extensive hipster street cred. Nico Muhly, recently commissioned by the Metropolitan Opera (I know, it's insane), has worked extensively as a producer for Jonsi and Sigur Ros (if you're a indie-rock novice, that's the Icelandic band that became famous for singing an album in a made-up language), and Mason Bates- recently named composer in residence of the Chicago Symphony by Ricardo Muti (!!!!!)- is a "serious composer by day, DJ by night."

If the last two accomplishments seem kind of absurd, well, they are- the Met? Really? One of the most conservative classical institutions in the country?- but good for them. They got ahead of the trend and went with it. 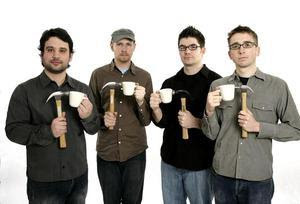 This is all leading up to a concert this Wednesday in Echo Park that is straight out of (Le) Poisson Rouge (literally). So Percussion is a leading avant-garde percussion quartet out of Yale by way of Brooklyn which made a name for itself doing with the music of David Lang et al. The tour promotes their collaboration with electronica duo Matmos. I have no idea what this concert is going to be like or sound like. But it's in Echo Park at the Rec Center Studio, so I know the type of people that will be there.