Finally, after the world has been waiting- ney- demanding action on this important issue for over twenty years, after all those protests and angry letters and boycotts, action has been taken. And I'm not referring to the return of Futurama. No, I'm referring to something much more dramatic. As previewed at Comic Con this year in San Diego- that ridiculous mecca for all things nerdy that may also involve comics somehow- the unbelievably small record label LA-LA Land Records will release a two CD set of the Original Danny Elfman score to the original Batman, you know, the one starring Michael Keaton and Jack Nicholson. Today, supposedly. July 27th. 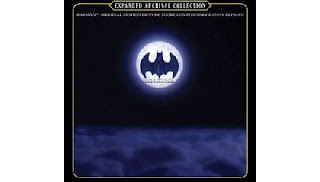 The 2-CD set will feature the COMPLETE movie score, remastered, and the complete original score album remastered with a bunch of extras thrown in. And they are only going to press 5,000 copies, making this an extremely limited collectors album. I know, it's hard to believe. But how cool will you be if you own one of those 5,000 copies? It's like you'll be in a super awesome secret society with only 5,000 other people. There can be secret handshakes and everything, like you're finally in that fraternity that you didn't want to be in anyways. Suffice to say, with this soundtrack, your parties will never be the same.

Actually, I list this because the point of my blog (and I can't go a blog post without a meta-reference to the fact that I'm writing a blog) is to talk about obscure but deserving musical achievements of all genres, and this definitely qualifies on both fronts. Though the actual movie soundtrack is not obscure at all- indeed, it is something of a cultural icon- this album release surely is. And it is well worth checking out.

Elfman detractors aside (and they still exist, mainly in cushy academic jobs where they have plenty of time to be bitter that they are not Danny Elfman), this is a pretty seminal musical achievement. And nobody, from what I can tell, debates that this isn't a great soundtrack. They just argue that he didn't write it or something, though they weren't there, but they knew a guy who knows somebody who worked for Shirley Walker or something. This argument makes no sense on so many levels that I would have to make up a really creative new metaphor to explain my exasperation with it. Leaving aside that it is hard to say just who writes what on any movie score, even those by academically acceptable composers, let's just say I know a guy who knows some people that work for Danny Elfman, and- oh, who the hell cares. It's great music. It's the end product that counts. And it makes you want to put on a cape and mask and brood. And make uber-dramatic poses.

Available (from what I can tell) only from the La La Land record label directly.
Posted by Ben Phelps at 2:38 AM